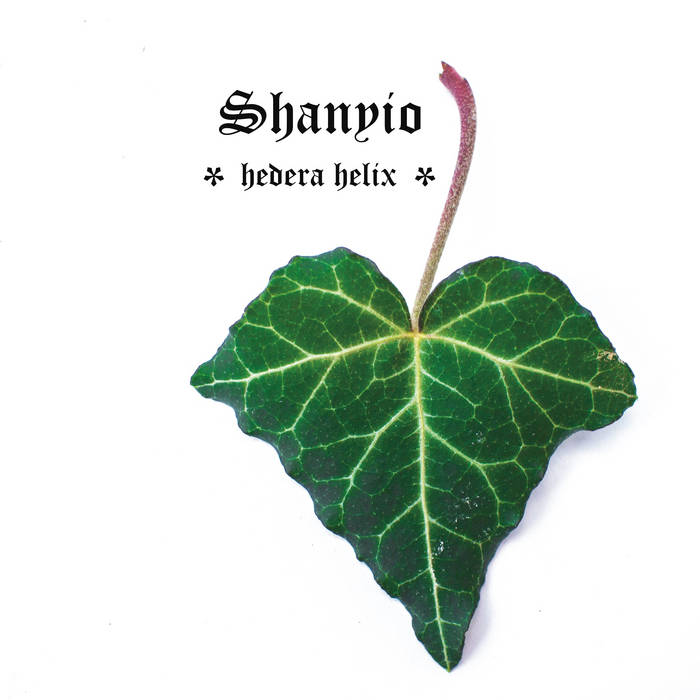 ..........................................................
Djordje Miladinovic (Dead Frequencies) about the album:
Shaniyo is no stranger to Dead Frequencies blog. I had a chance to review his previous brilliant work called C and this time Shanyio is pushing borders with another great tape called ”Hedera Helix”. Alexandru once again gathered a lot of great musicians to contribute on his latest piece of art, so this time he collaborated with Thomas Almadi and Emil Kindlein who both contributed with percussions, Rui Bonito who performed on Casio Sa21 and reel tape, Loalue who done electronics and mixing of the material while the Shanyio performed on cello, shakuhachi, appalachian dulcimer, layered all the effects and done the rest of the mixing. Shanyio catches all the rawness of the ambient music mixed with brilliantly produced instruments and by that he creates erie atmosphere pleasant to the ears, without any disturbing noises who might spoil listening experience. His knowledge of etno music gives advantage in his favor, so the presence of those elements is common during the whole album, but only in fragments. Those etno fragments sometimes play the key role in Shanyio’s music and sometimes they’re just a small layer implemented just as a pure decoration to the rest of the compositions. Cello as an instrument play the big part on Hedera Helix and I assume that all the drone sounds are recorded and processed by cello. Also, percussions are right up my alley and sometimes they define the tempo, especially with cymbals, so that addition to the compositions definetly gives the special treatment to the overall impression. A lot of layers of sounds are enriched with a bits and pieces of delay and reverb effects, so they are also great contribution to the atmospheric feel of the Hedera Helix. Another great tape performed by Alehandru Hegyesi, the man who play the biggest part of Shanyio and I am more than positive all the listeners will recognize the true potential of his talent if you purchase and listen to his Hedera Helix which is published by the Hiss And Groove Records.

Tabs Out Podcast by Ryan Masteller
Hedera is the name of the genus for ivy, the twisty plant that grows over everything if you let it. It can be nice when used decoratively. It can also kill trees. But the worst kind is probably obvious: poison ivy, the oily one that gives you a MAJOR itchy rash if you touch it, and if you scratch it, you can spread it. Take it from me – I am wickedly susceptible to poison ivy, so much so that I barely will set foot in the woods anymore. (Well, I live in Florida, so there’s snakes and alligators and scorpions and all manner of other awful things I could run into, so you can see why I’m better off keeping my distance.) Remember when your mom said, “Leaves of three, let it be”? Your mom was SO right.

Shanyio, aka Romanian artist Alexandru Hegyesi with guests, seeks, perhaps, to mitigate the effects of poison ivy by sinking into a deeply psychedelic meditative state on “Hedera Helix.” That sinking could also just be his way of carefully observing the biological structure of ivy plants in general and ruminating on them, but that would mess up my poison ivy narrative. Regardless, Shanyio musters a dense creativity when considering the flora, and the artists together craft a delightful and mysterious song cycle that burrows into your brain, sprouts roots, and takes over. Utilizing various percussion techniques, electronics, tape loops, and Hegyesi’s cello, shakuhachi, and Appalachian dulcimer, Shanyio defies categorization. But it falls pretty clearly within the electroacoustic/experimental side of things.

(What? It does! I don’t like that look you’re giving me.)

DNA is an enigmatic construction, a cagey, inexplicable scientific concept that’s really hard for us regulars to understand without assistance. Shanyio digs into the DNA of ivy with “Hedera Helix,” emerging with a sonic simulation that’s easy to get behind, even if you still have no idea what DNA actually is. [Ed. note: This is what DNA is.]

“Hedera Helix” is available from Hiss and Groove. “Ampex chrome type tape in transparent case. All cassettes are recorded one by one using a Tascam CD – A 500 (TEAC Professional Division) deck.
Individually numbered. DDA – digital recording, digital mixing, analog mastering.” I have no idea what any of that means.
www.tabsout.com

acoustic and a lot more
...for the rest of us.

Bandcamp Daily  your guide to the world of Bandcamp